I’ve criticized pizza before, especially when a big bunch of corporate wackos decided it’s ok to buy their way into the school system and further brainwash kids that regular pizza is ‘good’ food. Moving on!

But things are what we make them be, and I’ll be the first one to admit that taste-wise pizza is indeed appealing. I don’t think we should swear off things we like forever, but we definitely can bring our own sanity to the table and approach such things in a much healthier manner. 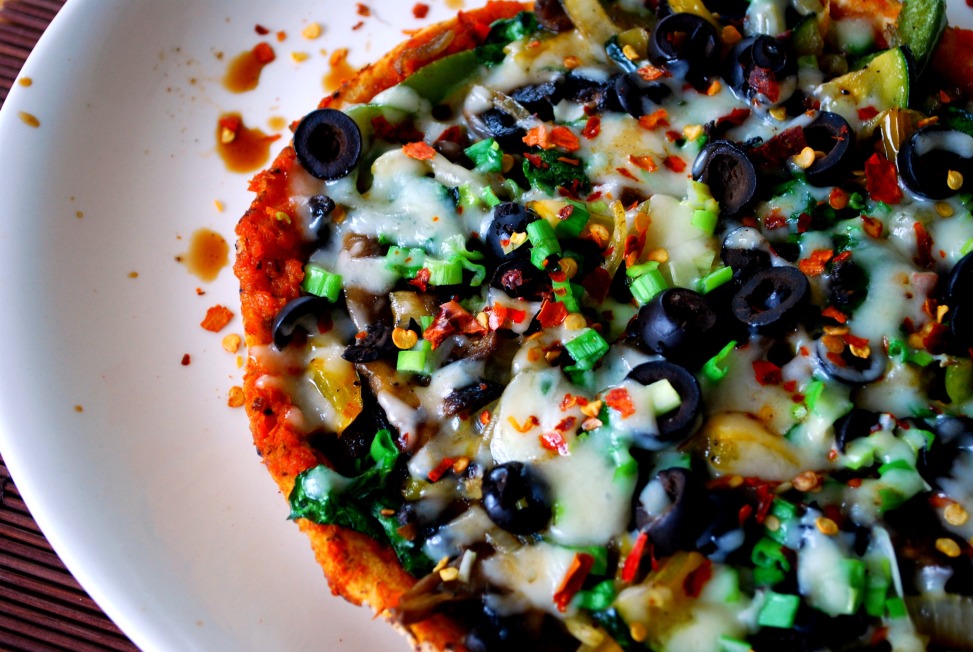 Eating can be such a psychological game. If you look at my picture you will see lots of oozy melted cheese. You know how much I used? The amount equivalent to the size of my thumb. That’s really what one serving of cheese should be. But of course when we go out to eat a poutin or when we have our nachos we are faced with gallons of the stuff, we don’t question it, and what’s worse: We assume that that’s what cheesy food is supposed to be like. We have been lied to, deceived, fooled! We’ve been made fat and unhealthy, all by power of misinformation that we happily accepted because you know, it’s cheese.

Casein (the protein in dairy) has proved to be quite addictive, so it’s likely that the vicious circle won’t end until we become aware and start choosing differently.

So what’s the trick? You can still use cheese, but use a little and keep it visible. Instead of placing a thick bed of it as the base underneath our toppings, as traditional pizzas would have it, we’ll sprinkle it on top of the whole thing. Also, grated cheese goes a long way because it covers much more area and melts much better, so suddenly a thumb size of cheese doesn’t seem like such an insignificant thing. Thumbs up to proper serving sizes!

Pizza For the Sane (makes 1 serving)

Any and all chopped vegetables you like! I used:

I had some of my tomato soup left over, so I transformed that into pizza sauce by placing it in a pan and adding Italian spices and garlic powder, and letting it simmer until the liquid was gone.

Preheat the oven to 350 F. Take your chopped vegetables except for the green onion, olives and spinach, and saute them in a pan with very little oil, at medium-low heat. Flavor them with salt and pepper to taste. Once your veggies are done you will take the spinach and toss in with the veggies, cover the pan and let it cook for one minute. Do not let the spinach in the heat for longer than 90 seconds because it loses its nutritional properties super fast.

Assemble the pizza by taking the pita bread, smearing your sauce on it, and placing all the sauteed veggies on top, adding the black olives in this moment. Place in the oven and let it warm all together for about 8 minutes. After this time, bring it out and add the chopped green onion and cheese, place back in the oven and allow for the cheese to melt.

I like to sprinkle my pizza with red chili flakes and Worcestershire sauce. Delish! This recipe is awesome because it allows you to utilize any leftover veggies that have been sitting in your fridge.

So, to recap: Why is regular pizza godawful?

1) Because of the crust: It’s made of white, processed, fattening flour.

2) Because of the ‘tomato’ sauce: It’s full of sugar, sodium, chemicals, preservatives, and without a trace of the benefits that real tomatoes would bring.

2) Because of the excessive amounts of cheese: It’s way too much, way too fatty, way too much casein that we don’t need.

3) Because of the traditional toppings: More grease, more fat, more stuff to expand your ass.

This pizza offers a solution to all of the above: Whole wheat pita bread in lieu of crust, homemade tomato sauce made with real vegetables sans additives, the proper amount of cheese, and delicious and colorful toppings that will bring a whole lot of nutrients to your body. Love.

Remember, your thumb is for measuring cheese and your middle finger is for the food industry as we know it because they’re lying, cheating bastards. Word.